This 48 pages story was fully illustrated by Kevin O'Neill (pencils, inks and coloring), with lettering by Steve Potter. It is the first part (Rise of the Zombies) of a whole story that will concluded with Super Babylon. It was first pre-published in the fortnightly British magazine Toxic! (Apocalypse Ltd), through #1 to #8, between March 28 and May 16, 1991 (larger size magazine format with good quality paper). 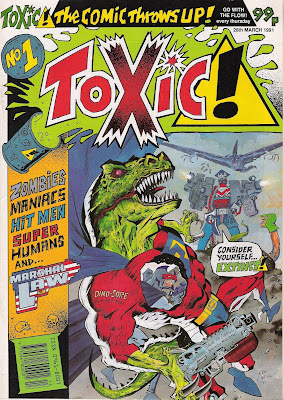 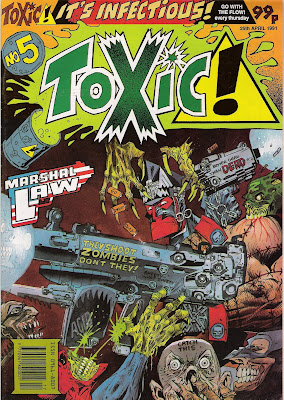 This magazine was using the Marshal Law story as headliner for its launching. Indeed, the logo of the magazine appears in the story. 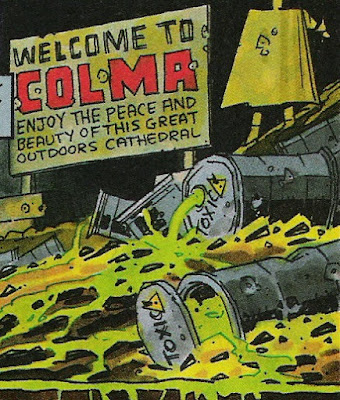 Marshal Law will make the cover for issue #1 and #5. For the first three issues, Kevin O'Neill was able to produce around 8 pages. From #4 to #8, this rate will fall between 4 and 6 pages, and then, apart two additional pages (see the Rites of Passage article) we will never see more new Marshal Law material in the magazine, that lasted 31 issues.

I have noticed in the first page of issue #6, an error with Black Scarab thought bubbles backgrounds that are red instead of yellow (see Toxic! #7). This was corrected for the release of the first paperback collected edition. Similarly, the Marshal Law logo used in each of the opening page in the magazine, has been further removed in the paperback.

Below and left-hand side, Toxic! #2, right-hand side same panel in the paperback edition.

In 1991, Apocalypse Ltd, immediately released the paperback both in the UK and the USA, in comics format (softcover), with the Toxic! #5 cover (the cover for Toxic! #1 being used as back cover). It comes with a very good glossy paper and printing quality. It also features new illustrations for the second and third of cover. 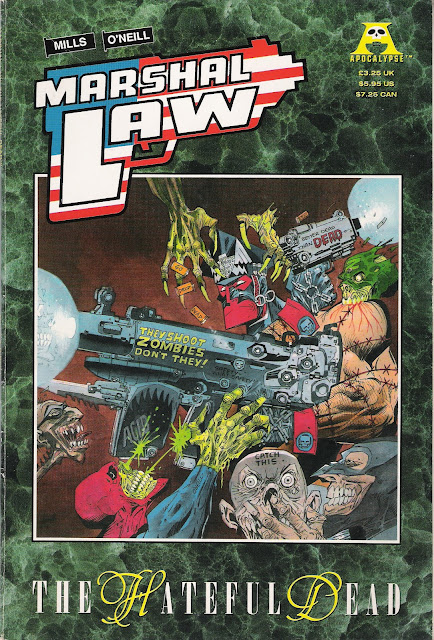 Below second and third of cover for the collected edition. 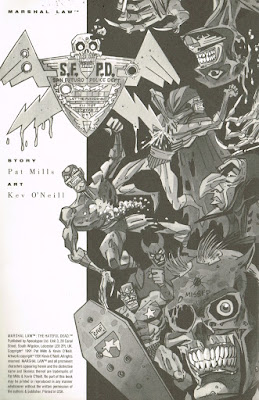 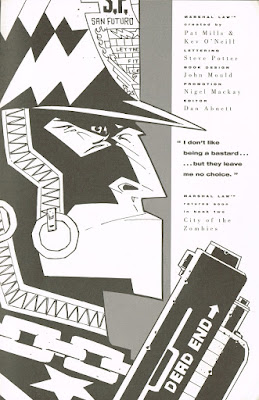 It is worth pinpointing that the character design is evolving under the pen of Kevin O'Neill. He has became more and more elegant and stylized (we barely see the inverted cross on the mask of the hero during this adventure). Graphically, Kevin’s drawings look much closer to his more recent works (The League of Extraordinary Gentlemen). I also think that the original subdivision in mini chapters makes this story one of the most intense and entertaining. 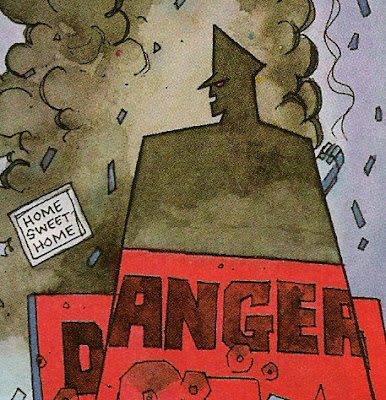 
Toxic wastes resuscitate superheroes buried in the San Futuro’s cemetery, and turn them into Zombies. Marshal Law is mostly responsible for the death of these so called heroes; nevertheless, he is pretty keen to do the work twice. Problem is, his former girlfriend Lynn Evans has been revived too. 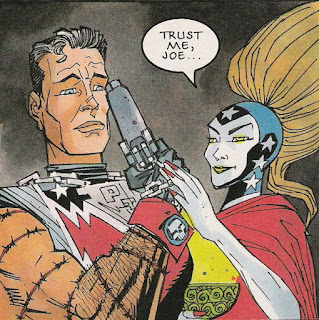 
As the character is now published in UK by Apocalypse Ltd and serves as the lead strip for a new weekly magazine, Marshal  Law is put back at the heart of the story. The key elements of his background are recalled in the very first pages: San Futuro, the war of "the zone", the earthquake.

The main missing character of this narrative will be his alter ego, Joe Gilmore, who will only appear in the last 2 pages, literally cannibalized by his costume counterpart. One can even feel that his parents are more those of the Marshal than his. This slight dehumanization is reinforced at the beginning the character is introduced by the sole means of his police function (his routines, his schedules). It will be explain that the thin thread that connected him to his feelings of compassion were broken when Lynn Evans was killed (the Marshal is somewhat "dead within"). And it is only because she will be resuscitated that Joe Gilmore will eventually reappear. 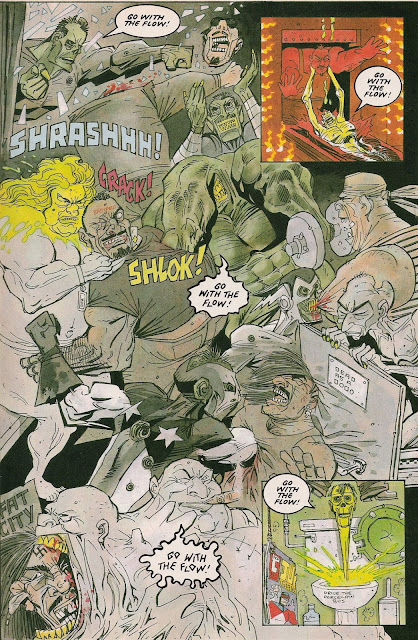 The main character evolution is actually the main theme. In this story it is about personalities suffering from not going "with the flow" (Razorhead, Marshal Law). Because despite being a cape hunter, he is nothing but a super hero himself, not so much different from the others (which is suggested in page 20, when the Marshal uses the services of costumed prostitute).

Beyond the Marshal's hatred for his fellow super-heroes, the hatred that he feels for himself is being more and more tangible, and that will lead him to the fatal gesture depicted in the very last panel. At the end of the story and for the first time, he will even show mercy towards another super-hero. 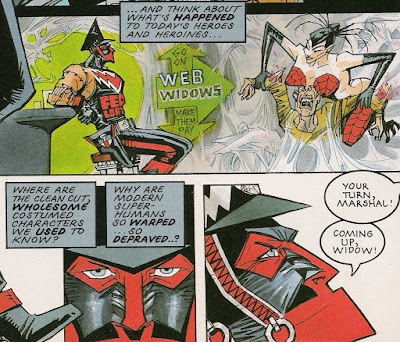 What's better for a "linving-dead" hero than the Zombies genre. If the story is initially very close to the film The Return of the Living Dead by Dan O'Banon (1985), it is strongly leaning towards the metaphorical approach used in George Romero's quadrilogy (Night of The Living Dead, Dawn of the Dead, Day of The Dead and Land of the Dead). In the modern society, we are already walking living dead. Unlike the more recent Marvel Zombies which uses only the concept (and 17 years before that), the authors use the inherent ideas behind the concept to dig deeper in the psyche of their character. Furthermore, the Zombies depicted by Mills and O'Neill, even if they too share a certain taste for human flesh, have kept their critical mind! 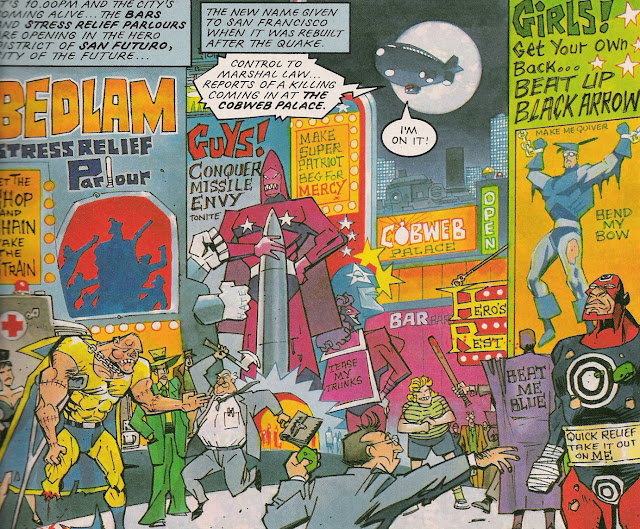 Finally, the first part of the story, which explores some of San Futuro's mean-streets, can be paralleled with the movie Cruising by William Friedkin (1980). The Hateful Dead deals also with an infiltrated cop into a particular sociological group (S&M homosexual New York community for the film, costumed heroes prostituting their powers for sado-masochistic humiliations in the comics), in order to investigate a series of murders, and where the hero will have to question is own assimilation to this community ("Go with the flow" or not?).


I am surely not exhaustive, but here are the references I have spotted (mostly DC characters): 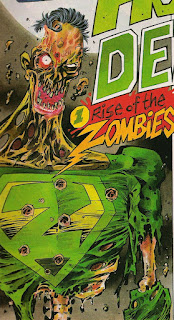 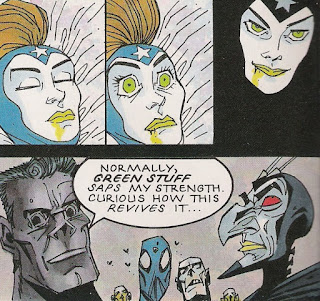 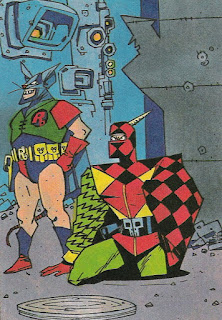 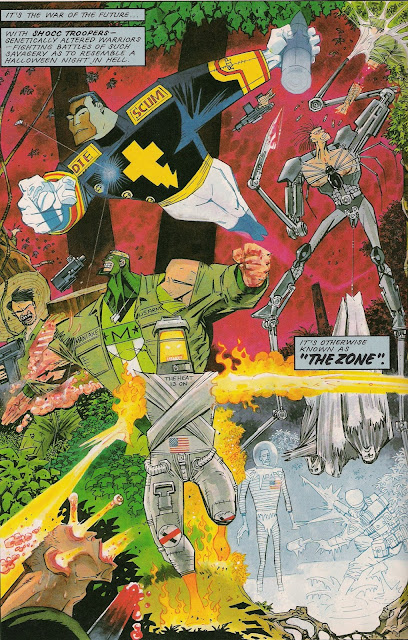 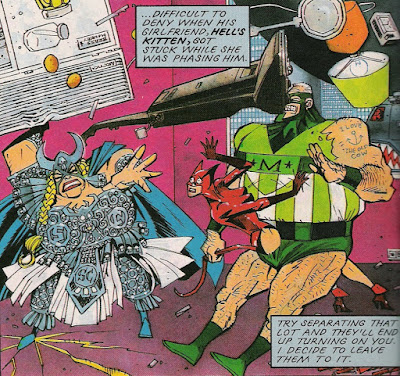 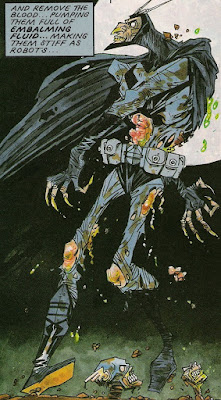 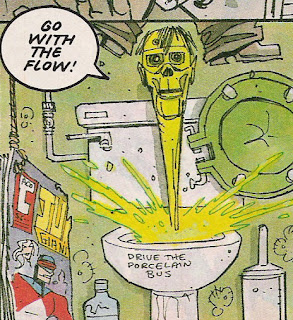 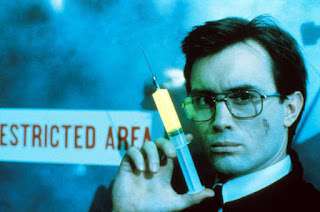 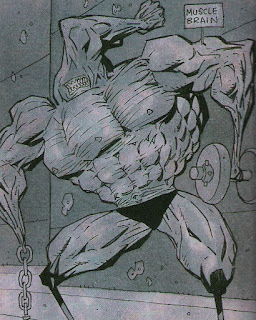 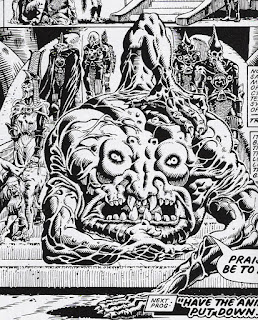 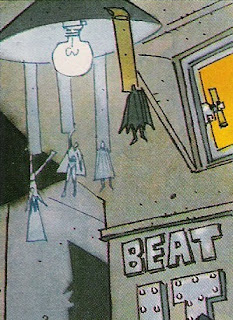 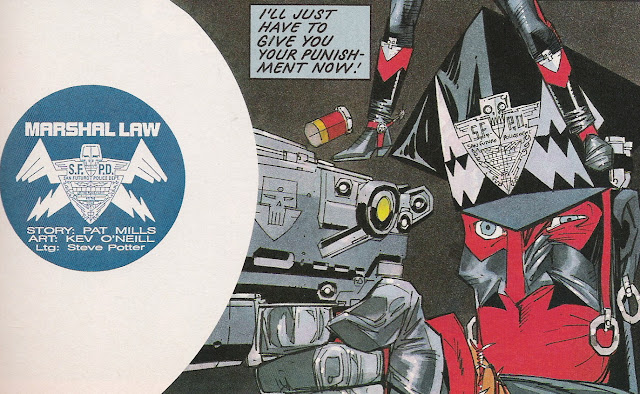 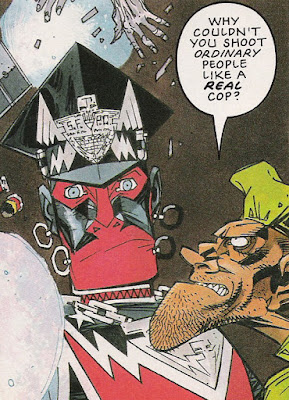 In 1993, Dark Horse Comics published this story in the Blood, Sweat, and Fears collected edition. If the paper is of very good quality, the colors are slightly less vivid than in the original one shot. This reprint includes the cover, back cover, and third of cover of the original Apocalypse Ltd one-shot with additional red coloring. 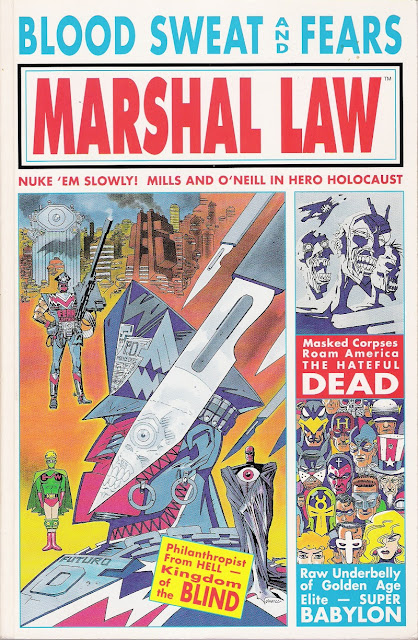 Blood, Sweat, and Fears was then reissued in the UK by Titan Books in 2003, with the Super Babylon cover, and without the minor coloring problem. This reprint includes the previous Dark Horse cover, plus the cover, back cover, and second of cover of the original Apocalypse Ltd one-shot. 
These reprints lack the back cover and third of cover of the original one-shot. You can find the detailed content of these two books here.

This story has been published in Italy in 2014 by RW edizioni, as part of the translation of the 2013 US DC Deluxe edition in three volumes (here in the second softcover volume). Therefore this reprint lacks the back cover and third of cover of the original one-shot.. 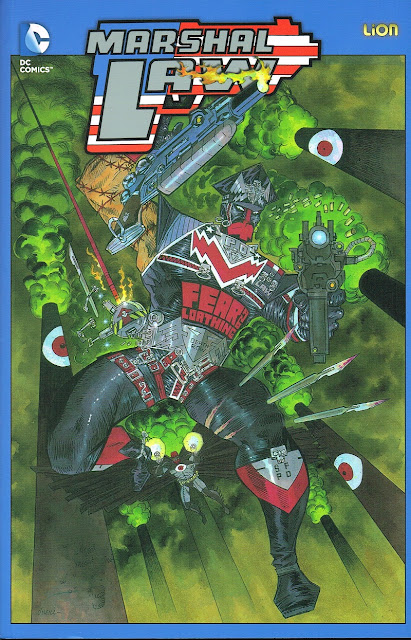 The translation has been redone and is credited to Susanna Raule.


The US DC Deluxe edition has also been translated in Spanish by ECC ediciones in three volumes.  The Hateful Dead is included in the second volume, and just like the US edition this reprint lacks the back cover and third of cover of the original one-shot. The translation is credited to Albert Agut Iglesias. 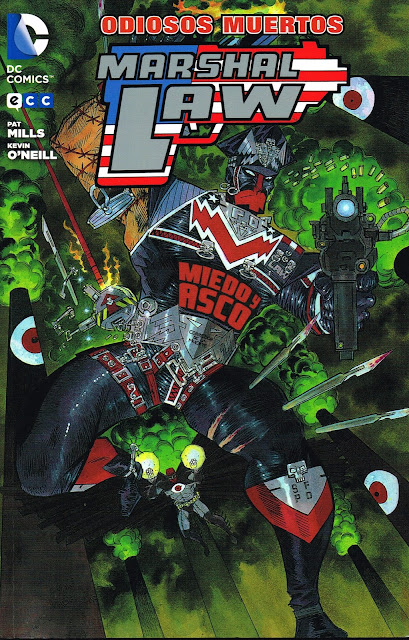